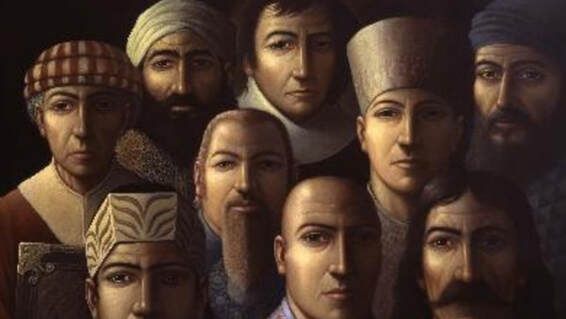 PART VII: THE CHANGES UNDERWAY NOW
© Paul V Young 2021
There is a growing awareness and acknowledgment today that there are immortal beings on Earth right now. They live among, and carry out activities right alongside, mortal humans. Some of them have come and gone over the millennia, while others have not left this plane for the past few hundred years. They are the Superhumans. As we have already noted, they ceased taking on public roles as leaders, guides and watchers of humanity two and a half thousand years ago. Nevertheless, they have neither lost interest in us nor deserted us.

In previous articles of this series, I have written about the Superhuman being who is my primary focus of interest: Apollo. In the first half of the second millennium BC, as a member of the Council of Nine, he was actively involved in the establishment of Western Civilization. As it progressed, this historic cycle has become notable for key characteristics such as democracy, the adoption of Christianity, banking, capitalism, and prevalence of the English language.

The 4th Industrial Revolution is a way of describing the blurring of boundaries between the physical, digital, and biological worlds. It's a fusion of advances in artificial intelligence (AI), robotics, the Internet of Things (IoT), 3D printing, genetic engineering, quantum computing, and other technologies. The main impacts driving this revolution are: high-speed mobile internet, AI and automation, the use of big data analytics, and cloud technology.

The current cycle of Western Civilization, however, is approaching its inevitable end. We are at a fork in the road. Some see a rosy New Age ahead, while others are calling it the End Days. I see it as a time of transition, during which we will need to rely on the return of the Superhumans.

Anticipated Changes to World Geography
In 1904 the British geographer Halford Mackinder, addressing the Royal Geographic Society in London, advanced a geopolitical concept now known as the ‘Heartland Theory.’ He divided the world into three major regions. The first was the World Island comprising Africa, Asia and Europe and it incorporated both a ‘Heartland’ and a ‘Rimland.’ The second division was called the Offshore Islands which included the UK and Japan; lastly were the Outlying (or Periphery) Islands comprising North & South America, Australia, NZ, PNG, Indonesia, Malaysia and the Philippines.

Mackinder asserted that whoever ruled Eastern Europe would have control of the Heartland and emerge as the most powerful state in international politics. This Heartland took in Russia, Kazakhstan, Mongolia, Tibet and a good part of northern China, down as far as the Yangtze River.

According to Australian barrister and lecturer James O’Neill, “What has transpired, especially in the past 16 years, is a geopolitical realignment that has given fresh impetus to Mackinder’s prescient view of the emergence of the “Heartland,” that is, Eurasia, as the focus and dynamic centre for the 21st century.” Mr O’Neill adds: “The fundamental fact of the 21st century is that the US no longer has the power to impose its will as it was largely able to do from 1945 to 2000. A new model, centred on the World Island Heartland is taking shape, with China and Russia as its major drivers.”[1]

On 18th March 2018, Russian President Vladimir Putin had himself re-elected for another six-year term, i.e. he will be in power until at least 2024. Just this week (in November 2021), China's Congress has again passed endorsements allowing President Xi Jinping to remain in office indefinitely. Iran’s President Hassan Rouhani is very much aligned with Russia, and Tukey’s President Erdogan is reorientating his country away from NATO and towards the East.

For our globe to be controlled from this hypothetical Heartland is certainly a possibility, and one that I suspect may be upon us sooner rather than later.

Where Does Australia Fit into the New Picture?
In the areas of politics and international trade, Australia may soon have to decide whether it is part of the East or the West. Not only does our geography tell us we are in the East, but China is now our main trading partner and we have strengthened ties with South East Asia generally in the 21st century. At the same time, there are fresh calls to break ties with the British Commonwealth and become a republic, although the newly established AUKUS agreement reaffirms our military ties with both the UK and the USA.

A quick glance at the map above reminds us that this vast continent stands apart from the rest of the troubled world and I, like many others, believe that it may well become the spiritual sanctuary of the planet before too long. Over the past few years, I have written a series of articles for New Dawn magazine about the historical figures who contributed to Australia’s spiritual, metaphysical and occult legacy. In ND Issue #152, September-October 2015, one such story was published under the title ‘The Mystique of the Manor.’ It was primarily about the historic building that was, and still is, home to the Theosophical Society in Sydney. I concluded it with the following paragraph (Note – CWL is Charles W Leadbeater):

“There is a conviction held by organisations and individuals concerned with esotericism that Australia has a special role to play in the dawn of a New Golden Age. In a series of lectures delivered in Sydney in August 1915, CWL had proclaimed “Australia and New Zealand as the home of a new sub-race.” He had detected in Australia “children and young people of a distinctly new type.” A new antipodean human type characterised by intuition and the powers of synthesis.   This is consistent with the New Age concept of Indigo Children.”

As evidenced by a number of conferences I have been attending in the past few years, this conviction is shared by many and I feel it is important to come together and form a communal vision of the future of this great land.

Many of us are now recognising that that this ancient land we call Australia is sacred; that it has been in rightful custodianship of our Aboriginal people for tens of millennia; and that it is yet destined to be home to a higher way of living in the not-too-distant future.

In the scenario described by Mackinder where the human leaders of the New World will rule from the Heartland of the World Island, it is easy to see how the Dark Forces might maintain and strengthen their control over the planet from that very location, through what is called the Industrial Military Complex. Some define this manipulating group as the Illuminati, although I object to the misuse of that name.

At the outset of Western Civilization, Apollo communicated with his followers at certain sacred places, or portals, in the region around the Mediterranean. When the time arrives for Forces of Light to counteract the dominance of the New World government in the ‘Heartland,’ the ideal location for his appearance will be in what Mackinder called the Outlying Islands, wherein Australia sits at the centre.

There is the anticipation by many of a coming pole shift of between 20 to 40 degrees for planet Earth. While some expect this to be caused by an asteroid, I believe it will be the result of internal planetary activity, as has happened throughout history. One possibility is simultaneous massive volcanic eruptions at La Palma, Mt Etna and Iceland, causing a huge shift in the world’s crust. Such a pole shift would probably also see the Antarctic being resituated at a more habitable location.

As I write this, Australia is going through a period that my mentor (fifty years ago) described as the Cleansing of the Sanctuary. I see my own role as being one of those who will be around to help rebuild society in a world of lost knowledge.

Most readers will be aware that Western Civilization was spawned by the Golden Age of Greece, which began in the 8th century BC. But we cannot ignore that this was preceded by the Greek Dark Ages, a time of total societal collapse in the Mediterranean region that began 400 years earlier with the end of the Bronze Age. Now, we are not facing another prolonged period of darkness, but rather a division of those who choose the Light - and those who prefer to align with Dark Forces.