The Next Two Decades 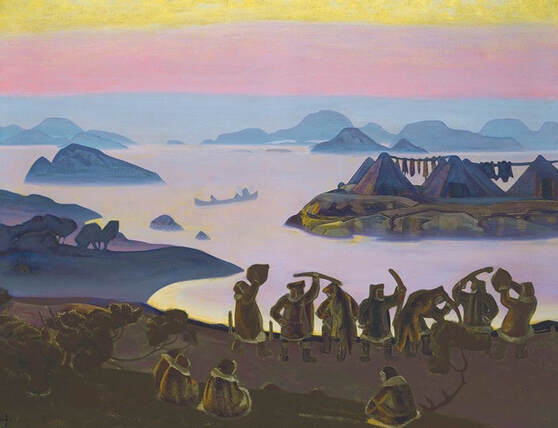 The Call of the Sun by Nicholas Roerich, 1919 – Wikimedia Commons
(Depicts a group of ancient tribesmen worshipping the coming sunrise after months of darkness in Russia’s far North.)
PART VIII: THE NEXT TWO DECADES
© Paul V Young 2021

Many people within the circles I move in are expecting momentous world changes to occur in the next two years, not just in our environment, but in the very nature of humanity itself. Whether or not time is really speeding up, it is obvious that the ‘Shift’ is unfolding exponentially, leaving many on the planet bewildered and voicing concerns about the general state of mental health in the community. The next two decades will be transformational.

There can be no doubt that the world will be a vastly different place by the middle of this century. My information is that there will not be a World War, but that Dark Forces will get the upper hand for a while. This could last for years rather than months.

In my last article – part 7 of this series – I included an image of Mackinder’s map. In it, the ‘World Island’ was divided into two sections: the outer part - the Rimland - covered Europe, the Middle East, India Indochina, and a good part China itself.

The ‘Heartland’ of this World Island covers most of today’s Russian Federation land, as well as the Ukraine, Kazakhstan and Mongolia. While it does not seem to encompass the whole of China, it does take in much of the northern part, including the Great Wall areas and down to the Old Silk Road. Notably however, it does not cover the capital, Beijing.

Today’s Western world has entered a new phase of hostile relationships with both Russia and China. At the time of writing in early December 2021, Russia seems set to take back the Ukraine and China is threatening to take Taiwan. While these situations are being referred to as new Cold Wars, there is much more at stake.
Unlike Western democracies, the leaders of Russia and China are neither accountable to parliamentary opposition nor to their citizens. In spite of the West’s best intelligence gathering efforts, there have been several recent incidents of being caught by surprise by military developments with these countries. Neither President Putin or Xi feel any obligation to be transparent.

Should they decide to jointly declare world domination, they will not necessarily need to resort to warfare, either nuclear or conventional. Both China and Russia are well advanced in the fields of cyber-attacks, weather control, artificial intelligence, covert surveillance, autonomous weapons and robotics, and even paranormal techniques such as remote viewing and mind control. Coming wars may well take place in cyber-space and outer space.

It is said that China will soon take over from the USA as the leading global economic power – but that depends on the current financial system remaining buoyant. A major market crash in the USA would have a flow-on effect in China.

However, an alliance between Russia and China would be an uneasy one, with the former consisting of a more Caucasian, Christian (allegedly) population than the latter. At the time of writing (early December 2021), Russia has just inked an agreement to supply weapons to India – a country that the USA has been hoping would take its side in containing the regional advances of China. The United States still seems to be vainly hoping that the Russian Federation might bow to the wishes of NATO and play the role of an Eastern European ally.

Ever since WWII, Russia has seen itself as the prime contender in gaining an upper hand over the USA for world domination. Some visionaries like Nicholas Roerich (a century ago) always predicted that Russia would be restored to its former glory. And, I believe that may come to pass some time in the future, but not under Putin. While he looks to us like just one solitary figure, Putin is merely the human face of a much greater non-human energy which controls the collective consciousness of a considerable group(s) of people.

At one time in history, this ‘Heartland’ region was Apollo’s province. Now he steps back from it temporarily as it embarks on a new phase of its internal struggles. Ultimately, the Dark Forces will be purged and the land will undergo a spiritual cleansing.

Was Hyperborea Situated in Russia?
In my writings about Apollo on this site, I have said that Apollo existed before the Olympian pantheon, and Herodotus recorded that he was first known by the Hyperboreans—an ancient and legendary people to the north. Stories have appeared online recently about the extraordinary discovery of the world’s oldest pyramids on the Kola Peninsula, suggesting to researchers that Hyperborea was located there. The Kola Peninsula is in the Murmansk area of Russia’s European portion.

Russian scholar Alexander Vasilyevich Barchenko (1881–1938) became persuaded that the Kola pyramids were built by the lost civilisation of Hyperborea, which the ancient Greeks considered to be ‘an island.’ The Barents and White Seas flow across the Kola Peninsula.

The Greek historian Diodorus Siculus (90 BC-30 BC) wrote that Apollo visited the country of Hyperborea on his ‘chariot’ on a regular basis. According to the Diodorus’ statement in Historic Library, Leto, the daughter of the Titans Coeus and Phoebe, the sister of Asteria, and the mother of Apollo and Artemis, was born in Hyperborea and, as a result, the locals worship Apollo there more than any other deity. He added, “The Hyperboreans speak a unique dialect and have a strong connection to the Greeks, particularly the Athenians and the Delians.”

The New World
While the planet undergoes the approaching period of conflict, my understanding is that the Superhumans will not directly interfere with our experience. That could change though, should the world powers start rolling out their nuclear arsenals. Otherwise, this will be the real test of humanity choosing between the Forces of Dark and Light.

It is a crucial moment for humankind, as we stand on the precipice of what I call the ‘Second Fall.’ We are on the verge of what is commonly being referred to as Transhumanism (H+). In what has been recorded as our Original Fall, we plummeted from our heights as spiritual beings with ethereal bodies down into mammalian bodies in which we doomed ourselves to repeatedly incarnate.

Biological robots have already been created and Artificial Intelligence is all set to become conscious and aware of itself. Just as the Watchers came down from the Ethereal Realm and intermingled with physical humans at the time of the Original Fall, the Dark Forces would have our souls become even more deeply entrenched on the 3D mundane plane by way of Transhumanism.

Once the coming turmoil has settled down in the northern hemisphere, the Superhumans will make themselves known to us once again. Australia has already been undergoing its ‘cleansing of the sanctuary’ and Apollo will make his appearance in this land, after which it will serve as a sort of southern Hypoborea - in counter-balance to the influence of the World Island and its Heartland to the north. 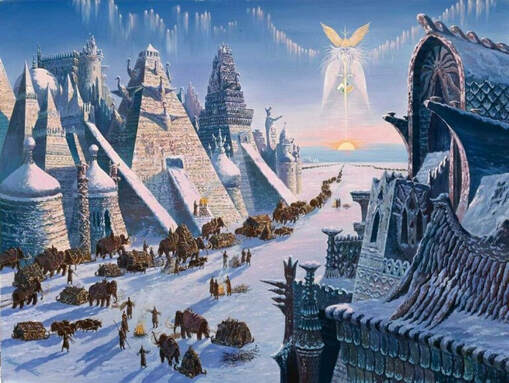