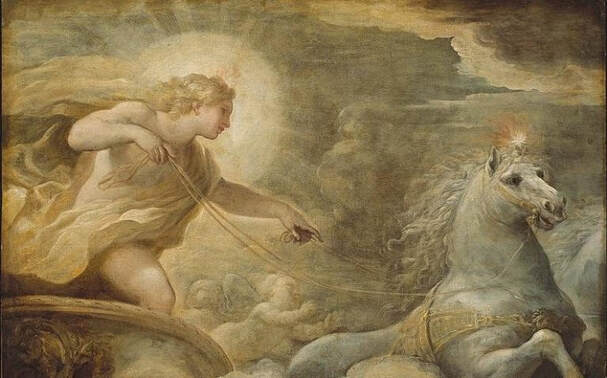 For many centuries now, esoteric teachings have informed us that otherworldly masters dwell on the plane directly above us, often at ‘sites’ that coincide with Earthly locations such as the Himalayas, Mt Kailash, Mt Shasta and the Gobi Desert. There have been numerous sightings of floating ethereal cities in the sky, particularly over China. At the time of writing, there is a mention on the ExoPolitics website of gigantic city-size structure called the Ashtar Command base, permanently hovering 72 miles above the Earth. (I am not sure whether this is the same structure as what is known as the Black Knight Satellite).

The Superhuman we know as Apollo made his first entrance, more than three thousand years ago, onto the Earthly plane at the island of Delos in the middle of the Aegean Sea. This island is sacredly revered even today – visitors are not allowed to stay overnight there. [The use of islands as dimensional portals is not uncommon. For example, Viracocha also came and went by way of the Island of the Sun, in the middle of Lake Titicaca, Bolivia].

Apollo’s area of interest centred on the Mediterranean, around which the ancient empires arose. Together with others – human, non-human and hybrid – he was instrumental in setting in motion the phenomenon we call Western Civilization. In an article I wrote back in 2015 titled Apollo’s Legacy, I quoted the renowned author Peter Kingsley, who said, “Civilizations never just happen. They are brought into existence quite consciously, with unbelievable compassion and determination, from another world.”  As I mentioned in that same piece, Apollo was around to initiate Pythagoras in the 6th century BC. It makes sense that Apollo is closely watching, and to some degree participating in, the closure of this Western Civilization cycle now in the 21st century AD.

His brother Hermes is readily accepted as a living person, mainly because of the body of written work he bequeathed us, and also writers such as Cicero and many early Christian scholars (such as Augustine) all agreed that he had lived at the time of Moses. This places the date of the first appearance of the Greek Pantheon of Gods, who were born from the Titans, to the second millennium BC. Hermes, as we know, was the instructor of Apollo’s son, Asclepius, who in turn introduced medicine to us.

Most people who are ‘awake’ to what is going on the world today, recognize that there are both Light and Dark Forces at work. A pessimistic view is formed by some that we are in what is popularly known as the End Days, while others are more optimistic in looking forward to a New Golden Age. Most probably, these events will come hand in hand.

The Dark Forces want to keep human souls trapped here on the Earth plane, whereas the Light Beings want to enable us (or, those of us who want to,) to ascend to the higher dimensional plane from which we fell, thousands of years ago. We know that less than 1% of the world’s population run the affairs of this planet, and they do so by controlling finances – in particular, their wealth is derived from ‘interest’ which is levied on even the poorest among us.

You are probably already familiar with the names of the families and societies who pull the strings, e.g. Rothschild, Soros, Morgan, Bush and Clinton, but note that there are ten or so organizations that act as vehicles for determining the way we live. Three that pop up as shareholders every time are: Blackrock Inc, The Vanguard Group Inc, and State Street Corp. Although you might have immediately thought of the ‘new money’ tech billionaires such as Gates, Bezos and Zuckerberg, I believe they are perhaps being used as stooges in the game (which has been played for centuries) – with those huge shareholder investment organizations calling the shots.

As for the families who have been ‘at the helm’ for the past two or three centuries, they are under the influence of unseen forces and form what are called egregores to unite and coordinate them on the psychic level. Like-minded personalities can form a collective field of consciousness.

The spiritual beings of Light, on the other hand, are not Earth-bound entities. Many of them are from the Solar Sphere (children of the Sun) and have been known since ancient times as Sky People, visitors from the stars, deities or angelic entities. Prior to a certain point in history, roughly two and a half thousand years ago, they had constantly made themselves known to us ‘common’ mortals, although many of them never actually incarnated as physical beings.

At this point we should note the difference between the beings who temporarily materialize in our dimension, and those who actually incarnate here for a lifetime (of whatever duration) in physical human bodies.

If non-human intelligent beings (NHIBs) “incarnate”, as Avatars, their conscious awareness has to be limited by their being on this plane. Likewise, if a powerful otherworldly energy takes on human form temporarily, they are limited for that short period. This is in contrast to what is experienced while in higher dimensions, namely the ability to communicate to anyone on the planet, no matter what their location - seeming to be ‘ever-present.’ Think about the words omnipresence and omniscience, or the term non-local consciousness, versus human awareness. For anyone who believes in prayer, the implication is that many people all around the world can be in communication with an otherworldly being simultaneously. This ability is seriously impaired when such an entity incarnates as a human being.

The Cycle of Western Civilization
Ancient Egypt had been the repository of knowledge and wisdom inherited from earlier races, who have been written about by other creditable authors, and are not the focus of this article. During the first millennium BC, the baton was passed to the Greeks and Western Civilization was born. Many of its ideals were entrenched and expanded under the Roman Empire.

Some of the essential characteristics that define Western Civilization today are: the English language; the Christian religion; democracy; capitalism; government-controlled systems of health and education; human rights. This last one, however, has only come about after centuries of colonization and slavery.

With the new global conscious awakening going on right now there is agreement that this Western Civilization has reached the end of its cycle. There is no clear consensus about what its end will look like and what will come after it. Social activists are talking about the Great Re-Set; religious adherents believe we are in the End Days; New Age thinkers say humanity is upgrading frequency to a higher dimension; some mystics predict a new Golden Age; UFO/ET enthusiasts anticipate the coming Disclosure.

In the modern-day version of democracy, ruling parties of the Western Civilization swing back and forth between those of the left and right. But certain elements of these governments are unelected and do not change at the whim of the public. In today’s super-power, the USA, those families and societies we looked at earlier operate via the CIA, the Pentagon and NASA. Hence the term military-industrial complex – as described by President Dwight (Ike) Eisenhower in his 1961 farewell address.

In the ensuing sixty years it has often been said that these ‘secret government’ authorities do not want to reveal the truth of otherworldly entities to the public because it might cause panic. In my opinion, if it was announced tomorrow that physical beings of flesh-and-blood have travelled to Earth in flying saucers and are conversing with world leaders, there would be little surprise among the human race – perhaps a justifiable level of apprehension, but not widespread panic.

On the other hand, if they are to disclose that there are visitors among us who regularly come and go between this dimension and realms of different vibrational frequency, there would be initial disbelief, followed by demands of proof and then, maybe, anger at the veil of secrecy. If it turns out that the Anunnaki, the gods of Mt Olympus, the Tuatha De Danaan, the Sky People known to indigenous Americans, the Biblical angels and the Ascended Masters – are all immortal Superhumans from another dimension, then that would really test everyone’s mental and emotional limits.

Where there are angels, there are also demons. This is why even the most optimistic believers of religions and New Age movements expect a “battle” to play out between the Forces of Light and Dark. In other words, a dark night of upheaval before the dawn of a new golden era. There are lower-worldly forces that want human souls to remain Earth-bound. There are many who will follow them willingly, but even those who are drawn to the Light must undergo the distraction of false prophets and an ‘Antichrist’ as part of the process.

There are many roads open to those looking for a way to return home, and it is not my intention to persuade anyone with my writings. It is simply appropriate for me to diarize my journey at this time of great change.

On the Akashic level I belong to a brotherhood which I’ll just identify by the abbreviated name of PX, that follows the tradition of Apollo. He is not God; he is a messenger of Light from the Solar Sphere. My knowledge of those who were once called ‘gods’ does not conflict with my spirituality. The Christian New Testament might just have well been taken as an extension of the teachings of Pythagoras, Socrates and Plato, rather than being tacked on to the Hebrew’s Old Testament.

When I use the term Solar Sphere, it is helpful if you consider what is called the Heliosphere. Think of this as a gigantic balloon, with the Sun as its nucleus, and the outer surface of it being the Oort Cloud. Earth’s orbit, although functioning on a flat plane, corresponds with one of the many spherical levels surrounding the Sun. My understanding is that our solar system is teeming with intelligent life which goes undetected by the five physical human senses (which are, in fact, extremely restricted).

Lately I have come across stories by, or about, people who have been visiting Delos and staying at Delphi to reconnect with Apollo, however I have been unable to trace them through conventional worldly means. I would be happy to hear from other members of my ‘tribe’ if they should read this article – via email AustralianEsoteric@gmail.com .

Apollo’s places of contact are traditionally known as being in the Mediterranean locations of Delos, Delphi, Samos and Akragas (Agrigento). Like all discarnate beings of the higher dimension, his reach is not restricted by geography. As one of the architects of Western Civilization, his areas of concern have always been Europe & Britain, along with the more recent additions of USA and Australia.

Readers will be aware of the very recent political and military developments between these countries, as part of what is commonly being called the New World Order.

There is a reason that some of us have chosen to be here in Australia at this time, in the third decade of the 21st century.