When gods mingled with mortals 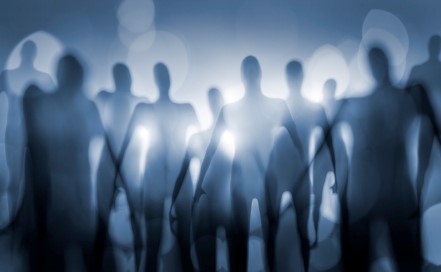 PART I: WHEN GODS MINGLED WITH MORTALS
© Paul V Young 2021

Most of us are intuitively aware of the existence of invisible beings, at least to some degree, as attested by the religions, mythology and history of various cultures right around the globe. The question you might ask yourself is: why do we hear legends of superhuman-like beings mingling with us, and deities or divinities ruling over us, and yet not witness them ourselves in the current day and age?

It is my understanding that these superior rulers stopped interbreeding with humans and deliberately ceased their mingling with ‘common mortals’ during the Golden Age of Greece – right at the birth of Western civilization – about two and a half thousand years ago. Having said that, they still do communicate with a select number of powerful people on the planet today.

Ancient cultures – those around the Mediterranean and also in Central and South America – understood the three levels of existence that affect us most: the Earthly plane, the Celestial plane above us, and the Underworld. This middle Earthly plane we dwell on is host to both physical beings (i.e., humans and animals) and energy beings. The latter are often referred to as spirits by us humans, although they are simply non-material ‘people’ composed of electromagnetic energy. The noted mystic Paracelsus referred to them as having “flesh that is not from Adam.”

But certain ‘guardians’ from the higher Celestial plane have been known to interbreed with beings of the Earth plane – both physical and non-material - and produce hybrid offspring. Invariably, those from the higher planes are known to be tall, fair-haired regal beings. In South America, the advanced beings who established early civilizations are referred to as ‘White Brazilians’ and they produced superhuman (or ‘demi-god’) leaders to rule over the lands.

Some of the more common classes of these subtle-bodied beings and their offspring are recognised by communities in several countries around the world today. In Ireland, for example, the Sidhe are the hybrid descendants of the higher-realm Tuatha Dé Danann. In Iceland, the huldufólk (hidden people) are the hybrid offspring of the álfar. Inhabitants of many of the islands in the Philippines today have experiences with the dwende, who are the result of engkantos breeding with humans. In a number of enlightened communities – such as Findhorn in Scotland – more generic names are used: those of the higher realms are Devas and the ‘lesser’ beings are Elementals.

Who Rules the World?

There has existed - throughout the recorded history of the past five millennia or so – an Ennead known as the “Council of Nine.” The earliest mention of this tribunal was at Heliopolis in ancient Egypt, consisting of: Atum, Shu, Tefnut, Geb, Nut, Osiris, Isis, Nephthys, and Set.

In China they were known as the Nine Emperor Gods. They are still recognized every year in a nine-day Taoist celebration, beginning on the eve of 9th lunar month of the Chinese calendar. This includes Southeast Asian countries such as Singapore, Malaysia, Thailand and Indonesia.

In ancient India, they were first recognized as the Nine Unknown Men by Emperor Ashoka when he converted to Buddhism in the 3rd century BC. The Nine Unknowns guarded nine books of secret knowledge and their role was said to be the preservation and development of information that would be dangerous to humanity if it fell into the wrong hands. Louis Pauwels and Jacques Bergier, in their 1960 book The Morning of the Magicians, claimed that Pope Silvester II had a meeting with these Nine Unknown Men around the turn of the first millennium.

Prior to the start of the Roman Empire, the Etruscans were guided by their own Council of Nine, called the Novensiles, who were usually invoked collectively as a single council.

In ancient Greece, Zeus gathered together the Council of Nine. Its members were Aphrodite, Apollo, Athena, Demeter, Hephaestus, Hera, Hermes, Poseidon and Zeus himself.

In Mesoamerica, the Nine Lords of the Night are known in both the Aztec and Maya cultures.

I suggest there is just one Council, composed of nine beings, who appear under different names and personalities appropriate to the culture and times in which they manifest.


There are two prominent instances of contact from the Council of Nine during the twentieth century. One is the account of Valiant Thor, who appeared in Washington USA on 16 March 1957, as a representative of the Council. He was brought to meet President Dwight Eisenhower for talks, and ended up staying for three years in an apartment at the Pentagon.

Laura Eisenhower is the great-grand daughter of the president and has spoken publicly about the existence of Valiant Thor. I had the pleasure of meeting Laura at the first Cosmic Consciousness Conference held at Uluru in 2017. It has been well documented how the 34th President of the USA, nick-named Ike, met the with extra-terrestrials on three separate occasions at the Holloman Air Force base, which was witnessed by a number of people. Valiant Thor, though, was an ‘Ultra-Dimensional.’

Ike actually wanted to open up to the public about his privileged encounters however, in the end, he yielded to the pressure brought to bear on him by Vice President Nixon along with the leaders of the military and intelligence services, agreeing to keep it all under wraps.

Writer Frank Stranges, who was introduced to Valiant Thor and befriended him during his three-year stay on the Earthly plane, published his book Stranger at the Pentagon in 1967. In it, he described the visitor’s arrival and interactions with the US government during the late 1950s. According to him, Thor had originally resided on Venus - a planet that, although inhospitable to our physical human bodies, provides a beautiful setting for those who dwell in higher dimensions.

Valiant Thor’s stated purpose was to share advanced technology with us and warn humanity about using nuclear weapons. His approach was one of persuasion, not intimidation, in line with the ‘directive’ policies. The U.S. government declined his advice for nuclear disarmament, and he departed the world lamenting that he had failed his mission - he is said to have dematerialized on March 16, 1960.

The second case that I am aware of began in 1958 with the creation of the ‘Round Table Foundation.’ It was founded by Dr. Andrija Puharich at his private estate in the U.S. after he made psychic contact with the Egyptian Council of Nine. He invited various psychics and mediums to channel the Council for a group of influential observers, including Warren McCulloch, an early pioneer in cybernetics; John J. Hammond, a student of Nikola Tesla; Henry A. Wallace, President Franklin Delano Roosevelt’s VP and Secretary of Agriculture.

One observer of the Round Table Foundation was future Star Trek creator Gene Roddenberry, who actively participated in the sessions. Roddenberry sat in and could ask questions of the psychics who were communicating with the otherworldly tribunal. He made regular contact with one of the Egyptian Council of Nine who, unlike Valiant Thor, disliked using a name, but eventually agreed to simply be called “Tom.”

The following exchange is excerpted from The Only Planet of Choice, compiled by Phyllis V. Schlemmer. In channelling sessions led by Ms. Schlemmer, Gene Roddenberry asks "Tom" of the Council of Nine about the eventuality of ETs appearing publicly on Earth:

Gene: Landings would undoubtedly be judged by humans and governments in a variety of ways, which includes the almost certainty that some would view your landings as a threat. Do you have a method of defending yourself from attack?

Tom: We wish you to know that we are talking about civilisations, not us, the Council of Nine. We do not need to manifest in the physical.
There would be a method to stop people from attempting to destroy those of the civilisations. It would be done in love and gentleness. Those of the civilisations that are in service to us will not attempt to destroy, nor harm in any manner, any physical being on Planet Earth. We will have a way of preventing them from attempting to destroy us. But we would wish not to come without giving some prior knowledge, for otherwise people would begin to believe that we would seek to control them. We have not the desire nor the need to control, we come only to benefit.

It seems that Roddenberry heard about the concept of a ‘Prime Directive’ from these sessions, which he used in his Star Trek scripts.
“I think the Prime Directive is that they are not to interfere with us, that we were given the power of choice, and so that they have to let us exercise that choice which the creator gave us, even though we often choose very badly, make the wrong decisions. That is our legacy. We’re allowed to do that.”
– Hon. Paul Hellyer (Canadian Minister of National Defense, (1963-1967)

So, unlike the dark forces behind the ‘Deep State’ or the ‘Committee of 300,’ the members of the Council of Nine may guide humanity in this new Age of Technology, but our Free Will prevails – for better or for worse. 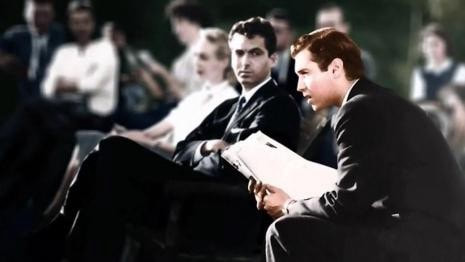 Valiant Thor on the far right (via Para.Wiki)